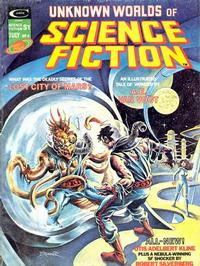 The Enchanted Village (Table of Contents: 4)

Overview of the life and career of Kline; includes a photograph.

A Vision of Venus (Table of Contents: 7)

Know Ye All By These Presents: (Table of Contents: 8) (Expand) /

Good News From The Vatican (Table of Contents: 10)

Art credits are disputed. To some, the image appears to be the work of Richard Corben; to others, it appears to be an astronomical photograph.

Encounter at War (Table of Contents: 12)

First Line of Dialogue or Text
This is where the captain was last seen.
Genre
science fiction
Characters
Captain Phillips; Sayre