Indicia title is Astonishing Tales & Deathlok.
This issue has variants: 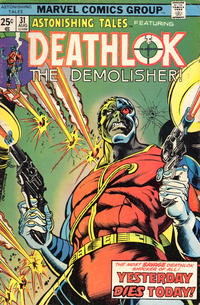 Genre
science fiction; superhero
Characters
Deathlok; Major Simon Ryker (villain); Mike Travers; Summers (death)
Synopsis
Mike Travers catches up to Deathlok who finds out that Mike had married his wife six months ago. Deathlok spares his life because he had saved his and then comes across a mobster that he hopes will lead him to the surgeon that made him into a cyborg, but the mobster manages to get into a helicopter before Deathlok can stop him.
Reprints

Why Won't They Believe Me? (Table of Contents: 4)

Genre
science fiction; superhero
Characters
The Watcher (host); Professor Crater
Synopsis
A man finds a crashed spaceship and reads the log which shows that the alien was to take the form of an earthling when he lands. The man goes to the Space Agency to warn them but the person he talks to (Professor Crater) pulls a gun on him. The man assumes that Professor Crater must be the alien but then finds out that the log is written in another language so he must be the alien and he has helped himself to be caught.
Reprints