Slaughter in Shangri-La! (Table of Contents) 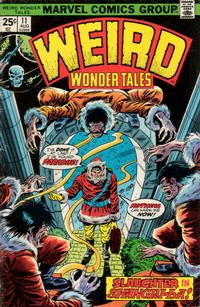 The Man Who Found Shangri-La! (Table of Contents: 1)

Job Number
[V-715]
Genre
science fiction
Characters
Harry Drumm; Paul Drumm
Synopsis
A thief uses his brother to find Shangri-La. He sees a ruin full of savages and flees into the mountains to die, while his brother finds paradise, since in Shangri-La everyone gets what they deserve.
Reprints

The Clock-Maker! (Table of Contents: 2)

Job Number
[V-627]
Genre
science fiction
Synopsis
The Clock-Maker cannot stand anything that's not perfect. When his bookkeeper makes a mistake it sounds like he has killed him. The local police arrive to discover the bookkeeper was a clockwork man and the Clock-Maker was repairing him.
Reprints

I Am Dragoom! The Flaming Invader! (Table of Contents: 4)

Job Number
[T-738]
Genre
science fiction
Characters
Victor Cartwright (only appearance); Dragoom (introduction and origin)
Synopsis
Dragoom, a flaming monster from the planet Vulcan, arrives on Earth and terrorizes the planet. The military are helpless before him, but a monster movie director fools him into fleeing by using special effects to fake the arrival of police from Vulcan in pursuit of Dragoom.
Reprints
Keywords
monsters

Narrated in the first person. Dragoom next appears in Nick Fury's Howling Commandos (Marvel, 2005 series) #6 (May 2006).