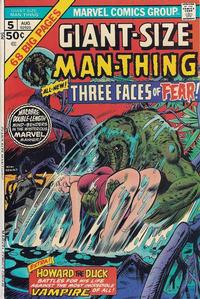 editorial explains this is the final issue to be replaced by Giant-Size Guardians of the Galaxy, a title that instead became a regular sized comic when the Giant-Size line was phased out.

A Sight for Sore Eyes (Table of Contents: 7)

Synopsis
A nearsighted burglar tries to find a cure for his eyes.
Reprints