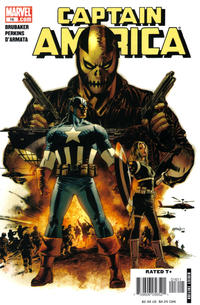 Genre
superhero
Characters
Captain America [Steve Rogers]; Sharon Carter; Crossbones; Sin; Bucky Barnes [as Winter Soldier]; A.I.M.
Synopsis
Crossbones has manipulated the Red Skull's daughter into a killing machine. Opening of the story has them both on a graphic killing spree. Captain America and Sharon Carter are on the trail of Bucky Barnes. Agents of A.I.M. confront Steve Rogers and Sharon in bed asking for their help. For what?
Reprints

Very rare sequence of Steve and Sharon in an intimate moment as the shadowy visions of WWII pass through the mind of Cap.