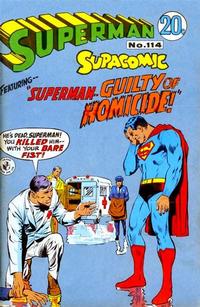 Mysteries of the Superman Awards! (Table of Contents: 2)

The Name of the Game is Superman! (Table of Contents: 3)

Art credits by Bob Hughes and Gene Reed. Credits for script and inks confirmed from Julius Schwartz's editorial records, provided by DC Comics. Records show that Bob Kane was paid for the pencils, but Bob Hughes, Gene Reed and other scholars agree that pencils were actually by Stone and Certa.

[If you lived on Jupiter, how many moons would you see?] (Table of Contents: 5)

Quiz on Jupiter; Face on the Moon; Quickest Sunburn; Start closest to Earth; and Jupiter trip.

Black Day for the Legion (Table of Contents: 6)