The Pirate Who Plundered Atlantis! (Table of Contents) 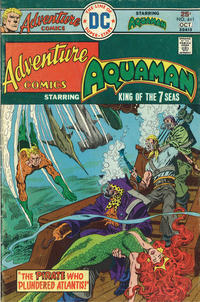 The Pirate Who Plundered Atlantis (Table of Contents: 2)

Job Number
J-3989
Genre
superhero
Characters
Aquaman [Arthur Curry]; Mera; Captain Demo; Dr. Vulko; Topo
Synopsis
Aquaman faces Captain Demo, a pirate who defeats Aquaman and takes over as king of Atlantis. Mera and other Atlanteans are upset with Aquaman's surrender, unaware that Demo has hidden bombs that will destroy the city if Aquaman does not cooperate.
Reprints

This story was apparently written in full-script form, pencilled, lettered (by Aparo), and inked. But after that for whatever reason, the original story was scrapped, and a new story written to match the art. The new script was then re-lettered (by Ben Oda) on new paper overlays and pasted over the old lettering on the original art. This is confirmed by looking at the original art, and peeling off the new lettering, an example of which was posted on jimaparofanclub.blogspot.com by M. W. Gallaher. (Note added by Allen Ross.)

In the forward for Aquaman: The Death of a Prince Deluxe Edition (DC, 2020 series), Paul Levitz explains that after he originally wrote the story, publisher Carmine Infantino felt that the inexperienced Levitz needed a more experienced writer to re-write the dialogue, and David Michelinie was brought in for that purpose.