The Sensational Return of the Macabre Manhunter! (Table of Contents)

Possible Orlando inks per Nick Caputo. The original cover credits supplied by Gafford stated that the inks looked like Al Milgrom. On a Facebook post, Milgrom states that he did not ink this cover.

The Comic Reader credits Mike Royer. Gafford stated that the cover inks were not by Royer. Also, in the same Facebook post as above, Royer said he doubted the inks were his.

In two collected editions that reprinted this cover and story the cover is credited to Steve Ditko only. However, in the text page for this issue it is stated that "Steve [Ditko] has put aside his inking pen and brush." Also, Gafford had stated that Ditko penciled the cover, but inferred that he did not ink the cover. 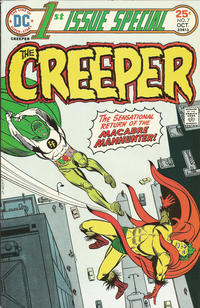 Menace of the Human Firefly! (Table of Contents: 1)

Colors and letters credits from Carl Gafford via the GCD Error Tracker.

The Story Behind the Story (Table of Contents: 3)

A history of the Creeper.