Grell credits for pencils and inks confirmed from Julius Schwartz's editorial records, provided by DC Comics. Batman figure is a modified version of the Superman figure from the cover of Shazam! (DC, 1973 series) #1. Colors credit provided by Anthony Tollin. 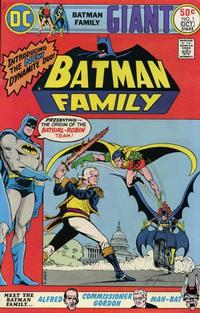 The Invader from Hell! (Table of Contents: 2)

The Origins of Batgirl and Robin the Boy Wonder (Table of Contents: 5)

Includes images of Batgirl and Robin incorporated into their respective logos.

Reprinted covers from past issues of Detective Comics #355, #385, #402, and Batman #192 with humorous dialogue replacing the original cover text.

Here Is the Original Dialogue for the Covers on Page 30 (Table of Contents: 10)

Displays the original dialogue from the covers from Detective Comics #355, #385, #402, and Batman #192 featured in Comedy Cover Capers.

Batman Presents... Challenge of the Man-Bat (Table of Contents: 11)

Reprints the first appearance of Man-Bat.

We Can Put DC Comics Right in Your Mailbox (Table of Contents: 12) (Expand) /

The Alfred Story (Table of Contents: 14)

A biography of Alfred, with reprinted panels from various sources surrounded by Batman and Robin narrating outside of the panels. Dialogue attempts to address the change of appearance Alfred undergoes between his early appearances and more recent stories. The story has no definitive ending; it just stops.