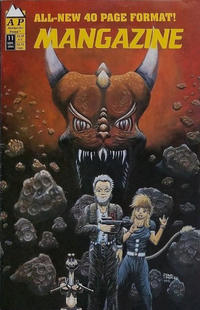 Indicia and table of contents including story credits, illustrated with panels from elsewhere in this issue.

First Line of Dialogue or Text
Oh my God! What the Hell is he trying to do?! This is so boring!
Genre
humor
Characters
Emiko Hiroshige; Takaku-Sensei
Synopsis
Emiko daydreams herself as a superhero during a boring classroom lecture.

Genre
drama
Synopsis
Alien technology in the wilds of Africa helps a gorilla save her child.

Lost in Translation (Table of Contents: 11)

First Line of Dialogue or Text
Before I get to the subject of this issue's article, I'd like to make a correction from last month.
Genre
science fiction
Characters
Jin Hyuga; Asuka Tsukishiro; Koji Hoshiyama; Belzeb; Falzeb; Taidar; Akudama
Synopsis
Article about the anime series Matchless Raijin-oh.