Credits for pencils and inks confirmed from Julius Schwartz's editorial records, provided by DC Comics. Credits for colors and letters provided by Carl Gafford via the error list. 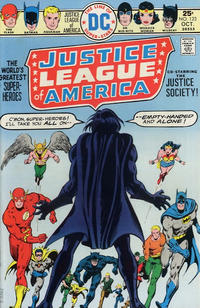 Credits for script, pencils and inks confirmed from Julius Schwartz's editorial records, provided by DC Comics. Amazing World of DC Comics #6 (1975), in promoting this issue, provided the following credits: “...the script is a collaborative effort between Cary Bates (plot and breakdowns) and Elliot Maggin (dialogue)....” Credit for colors provided by Carl Gafford via the error list.

DC comics staff portrayed as being from Earth-Prime, a world much like the real one, in which any stories happening elsewhere in the multiverse are printed stories on their world.