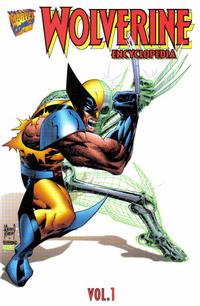 [Interior Front and Back Covers] (Table of Contents: 1)

Interior front and back covers are a collage of many small covers from the 1988 Wolverine series presented in black and white.

On Wolverine (Table of Contents: 3)

This is an index of characters who have intersected with the life of Wolverine utilizing a short profile and reprint character artwork from various comics; Not all characters profiled are represented by an image; There are from two to eight profiles per page.

Cover with no logo; Psylocke, who appeared in the original over Wolverine's shoulder, has been edited out and Beasts face (which was hanging upside down on the original cover) has been inserted right side up in her place.

Index with page numbers for characters who are profiled in this issue.