The Asteroid God (Table of Contents) 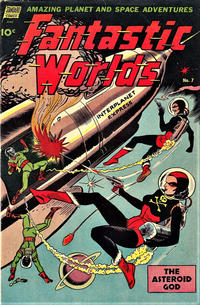 The Music Makers of Aldebaran (Table of Contents: 2)

Pencils previously credited to "John Giunta ?" This and inking credit suggested by Saltarella via the GCD Error Tracker.

The Ace of Space (Table of Contents: 4)

Previously credited to "Andru ?" as suggested by Saltarella via the GCD Error Tracker.

Job Number
B-1255
First Line of Dialogue or Text
When the candle burns down...
Genre
humor
Reprints

The Asteroid God (Table of Contents: 7)

Flight to Forever (Table of Contents: 8)

Doom in the Depths (Table of Contents: 9)