This issue went on sale very late. This issue's content was originally solicited to be contained in issue #7, but with the combination of issues #5 and #6 into #5 with an expanded page count, this content was moved to issue #6.
This issue has variants:

Nightwing & Flamebird... ...the Dynamic Duo of Kandor! (Table of Contents) 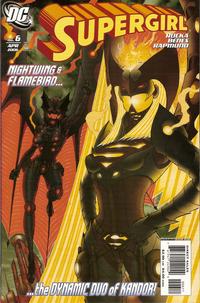 Candor Part One (Table of Contents: 1)

Characters
Supergirl [Kara Zor-El]; Power Girl; Ultraman [as Kal-El] (intro); Chezzt (intro); Praisesingers
Synopsis
Supergirl is in Kandor as someone calling himself Kal-El is railing against unbelievers, heretics, Nightwing and Flamebird. She is assaulted by aliens as a Kryptonian in the wrong sector. Nightwing arrives to stop them, but Supergirl injures an alien and kills them. Nightwing intervenes and Supergirl tells her she thinks the key to returning to Argo City is here. "Kal-El" is telling his slaves they can only be redeemed by serving Kryptonians, when cries of "Lies" are heard. Nightwing and Flamebird attack and free the slaves, as "Kal-El" arrives and destroys all witnesses to the attack.
Reprints
Keywords
Kandor

"Special thanks to Rob Lea". Story continues in next issue. Supergirl gets a Kryptonian tattoo that translates to "Hope". Under Nightwing's costume is Power Girl's outfit. The Kryptonian text on the signs on page 1 is translated as follows: "LOVE SHOW" (twice) and "SUPERMAN THE MOVIE".