I Invited Temptation! (Table of Contents) 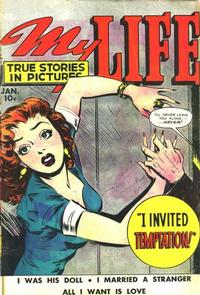 All I Want Is Love (Table of Contents: 1)

Genre
romance
Characters
Lee Allin; Ted Norris; Flo; Mr. Cardwell; Mr. Howard; Frank
Synopsis
Office worker Lee and engineer Ted are in love. Ted is working on a invention he hopes will make him wealthy enough to marry her. Lee inherits $28,535 from a distant cousin. Ted feels this puts more pressure on him to succeed; he proposes marriage to Lee but she stalls, worried Ted is interested in her inheritance. Lee dates other men and Ted feels she only loved him for his income potential. Ted’s invention is a bust; Lee lies to him and says her inheritance also fell through, and now they can marry because they’re both poor.

The first page, especially the splash panel, is almost certainly Wally Wood's work (look at Ted's face). However, the rest of the story is by someone else.

I Was His Doll (Table of Contents: 2)

Genre
romance
Characters
Rhoada Berman; Louise; Helen; Charles Wister; Ted Williams [Ed Willis]; Miriam; Aunt Lucy; Gustave; Madame Rosand
Synopsis
Office worker Rhoada never has a date because she dresses plainly. She gets a makeover from beauty expert Wister and spends her savings on new clothes. She goes on a blind date with Ed and all the men are attracted to her. Rhoada spends the weekend at Ed’s house, chaperoned by his Aunt Lucy. Ed and Rhoada continue to see each other, but when he makes a romantic move on her, she changes into her plain attire so he won’t be deceived. Ed loves Rhoada for herself not her outward appearance and they are married.
Reprints

The male protagonist is originally called "Ed Willis" but on page 6 his last name suddenly becomes "Williams" and he is alternately referred to as "Ed" and "Ted" (sometimes in adjacent panels) for the rest of the story.

Advice for the Shy Girl (Table of Contents: 4)

I Married a Stranger (Table of Contents: 5)

Genre
romance
Characters
Edward Hall; Kate Hall; Dr. Brent
Synopsis
Kate is engaged to lineman Ed but her parents want to know about his past, which Ed refuses to discuss, even with Kate. They elope and move to an apartment. Kate discovers some letters in Ed's coat pocket from "Madge." Ed won’t discuss it. Kate becomes pregnant. She learns Ed had a nervous breakdown after his wife Madge and their son were killed in a car wreck. Kate moves back in with her parents but after her child is born she and Ed happily reconcile.