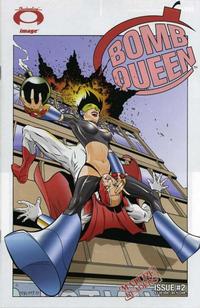 Genre
superhero
Characters
Bomb Queen; Angela; Ashe; Mayor Hilton; Robert Woods; Ace Justice (first full appearance)
Synopsis
America's favorite superhero, Ace Justice, intends to clean up New Port City! But after a decade of successful rule under Bomb Queen, will the people want a hero now? Bomb Queen can't help but wonder about the possible connection between Justice's appearance and the upcoming mayoral election. And, if she discovers a plot, she'll take extreme measures to regain control of her city again -- no matter how many she kills in the process!
Keywords
adult