Characters created for Hanna-Barbera by writer Michael Maltese, and based on the cartooning of Charles Addams. Mr. and Mrs. J. Evil Scientist never had a cartoon series of their own but appeared in several Snooper and Blabber cartoons, and one Snagglepuss cartoon (all written by Maltese) between 1959 and 1961. On-sale date from 1965 Books and Pamphlets, Copyright Office, Library of Congress. 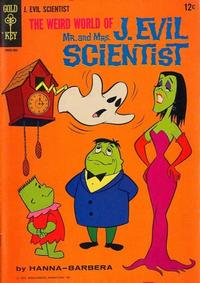 The Looner Gooners (Table of Contents: 2)

First Line of Dialogue or Text
Oh, it's you, Dear! Home so soon from your new job?
Genre
humor
Characters
J. Evil Scientist; Goonda; Junior; magic mirror; The Looner Gooners (father, mother, and son)
Synopsis
When Goonda asks a magic mirror on her wall "...Who are the strangest people of all?", she is disappointed to learn that the answer is not her own family, but the Looner Gooners - who are just outside and about to pay a visit. The Looner Gooners are inquisitive shape-shifting aliens who, in their "Earth-suit forms", resemble blue-skinned and angular versions of George, Jane, and Elroy Jetson.
Keywords
abounding oddities; aliens; horror comedy; magic mirror; shape-shifters

Dialogue and situations are "Maltese-ian". Characters also "transform" by whirling around, another "Maltese-ian" touch from animation.

A Scream in Time (Table of Contents: 3)

The Spook Trio (Table of Contents: 4)

First Line of Dialogue or Text
Oh, Goonda, this package just arrived for you! Did you order a new guillotine?
Feature Logo

Gloom for Rent (Table of Contents: 5)

First Line of Dialogue or Text
Since we got rid of Junior's pet "thing", we have this extra room, Dahling!
Feature Logo

Dialogue and situations are "Maltese-ian"! This story plays out just like a Hanna-Barbera cartoon featuring these characters. Junior "croaks", as he did in the cartoons, rather than speaks. Rectangular dialogue balloons.

[Goonda vs. the Guarantee] (Table of Contents: 6)

First Line of Dialogue or Text
Give me the works!
Feature Logo

Color on back cover. Pin-up. The front cover image is repeated on the back cover, sans logo and all cover copy.