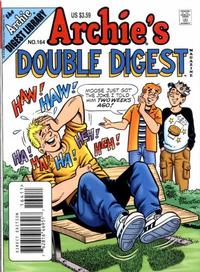 Back to School Already?! (Table of Contents: 3)

Gramps and Gram (Table of Contents: 5)

Spring in the Air (Table of Contents: 6)

Unusually for an Archie story (but like a number of Bolling's Little Archie stories), the lettering in this story mostly uses full stops rather than exclamation points.

Down In the Dumps (Table of Contents: 9)

Genre
teen
Characters
Archie Andrews; Veronica Lodge; Reggie Mantle; Dilton Doiley; Moose Mason
Synopsis
Archie hides a present he doesn't want Veronica to see in a trash can and when he gets back to it, finds the can has been emptied.
Reprints

First Line of Dialogue or Text
Archie, do me a favor?
Genre
humor; teen
Characters
Mary Andrews; Archie Andrews; Mrs. Morgan
Synopsis
Archie's mom has cleaned out the garage and she asks Archie to deliver it to the flea market.
Reprints

The Green-Eyed Moose-ster (Table of Contents: 12)

Send in the Clowns (Table of Contents: 13)

Script identifiable as Doyle by the style and by the appearance of his name in a store window on the last page of the story.

Running Away (Table of Contents: 15)

The costumes worn by the Archie gang are all parodies of Star Wars costumes.

The Saga of Fast Freddie (Table of Contents: 19)

A Weighty Matter (Table of Contents: 20)

The Game of the Name (Table of Contents: 21)

Genre
humor; teen
Characters
Archie Andrews; Jughead Jones; Betty Cooper; Veronica Lodge
Synopsis
The girls are upset at Archie's reluctance to say "I love you." Jughead comes up with a way to devalue the word "love" so it's no longer so special to girls.
Reprints