Giacoia and possible Tartaglione inks per Nick Caputo, who notes that both men, along with Mike Esposito, often assisted on covers together. 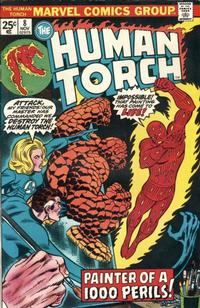 "The Painter of a Thousand Perils!" (Table of Contents: 1)

Genre
superhero
Characters
Original Human Torch [Jim Hammond]; Toro; The Un-Human (Introduction); Comrade X (Red Planet) (Introduction; no appearance); Dr. Carter
Synopsis
A spaceship flies over the city dropping a message from Comrade X of the Red Planet, stating that the earth must be destroyed so that his world's growing population can survive. A gigantic, monstrous eight headed creature wreaks havoc on the city and the flaming duo tackle it, but the creature is fireproof. Its fang-like tongue poisons Toro but The Torch rushes him to Dr. Carter, who tells him the boy's life can only be saved by a blood transfusion; luckily the Torch has the same blood type. As buildings continue to be destroyed the Torch uses the Doctor's chloroform to knock the creature out.
Reprints

"The Original" added to reprint splash to distinguish story from lead feature.