In the documentation for the testimony from Detective Comics, Inc. vs. Bruns (Fox) Publications April 6 and 7, 1939, the on-sale date for this issue is described by Jack Liebowitz as being April 18, 1938.

In a profile in the New York Daily News (27 June 1994), Tom DeAngelo claimed to have been the first to give color to Superman. However, in an interview in Comic Book Marketplace #33, Ed Eisenberg claimed to have originated the color scheme for Superman as an employee of Strauss Engraving Company, which did the coloring for DC at the time.

In Alter Ego #56 (February 2006), in an interview with Adler, he reports that he painted the colors on the engraving plates for this story. Info added by Craig Delich.

Adler was employed by the Strauss Engraving Company, which was contracted to do the coloring and related work for DC at this time.

Error Report #2990 by Mike DeLisa states the following: "Cover was not by Shuster, actually by unknown member of DC staff based on one interior panel. Coloring was not by Jack Adler; Adler states that the work was done by DC staff. My source is the Court record and decision, which includes affidavits from Siegel, Shuster, and Adler."

Superman/Batman (DC, 2003 Series) #41 (December 2007) identifies bystander on cover as Rick Radomski of Radomski Hardware. Though this takes place during a dream sequence, the name could be considered canon.

Conversely, the cover mimics a scene within the story. In the story, the owner of the car is Butch Matson, a gangster who threatens Lois Lane, and flees in panic from Superman's wrath in the same manner as depicted on the cover. Very likely the figure on the cover is meant to be Butch Matson.

Per Todd Klein's Facebook posting, Comics Logos A #1: ACTION COMICS on 1 January 2021, Ira Schnapp had been attributed in the past as the Action Comics logo designer, but Schnapp told Michael Uslan in the 1960s that he did not do it. Designer of the logo remains unknown. 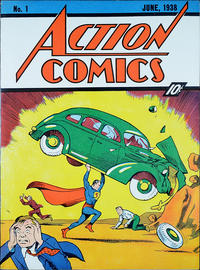 First Line of Dialogue or Text
As a distant planet was destroyed by old age, a scientist placed his infant son within a hastily devised space-ship, launching it toward Earth!
Genre
superhero
Characters
Superman [Clark Kent] (origin) (introduction)
Synopsis
A space vehicle from a destroyed world lands on Earth, and its occupant becomes Superman. In addition, a scientific explanation for this being's powers is given.
Reprints
Keywords
ants; grasshoppers; Krypton; Kryptonian rocket; train

This strip was originally prepared for newspaper publication, cut up, and re-paged. Black shading was used.

[The Coming of Superman] (Table of Contents: 3)

Originally prepared for newspaper publication, cut up and re-paged, most probably by Joe Shuster. Vin Sullivan, Sheldon Mayer, and Harry Lampert are often cited as having done the paste-up work based on their own claims.

George Taylor was first named in the newspaper strip in May 1939.

First Line of Dialogue or Text
When Charles Dawson, owner of the Circle-D Ranch is killed in a bloody Texas range war, his young son and only heir goes to live with an uncle, a horse raiser in Wyoming -
Feature Logo

The Mystery of the Freight Train Robberies (Table of Contents: 6)

First Line of Dialogue or Text
This is serious, Tong.
Feature Logo

On the 11th page of this story, the text says Zatara transforms Tigress's gun into "a bullet," but the illustration shows a banana.

First Line of Dialogue or Text
For an instant, the sky to the west was splashed with all the vivid colors of nature's paint box.
Genre
adventure
Characters
Bret Coleman; Cottonball; Merna Newton; Samuel Newton; South Seas natives (villains)
Synopsis
Bret and Cottonball seek to rescue one Samuel Newton, whose daughter was carried off into the jungle by a pack of savage natives.
Reprints

First Line of Dialogue or Text
It's the year 1271.
Feature Logo

The Adventures of Marco Polo
Genre
historical; adventure
Characters
Nicolo Polo; Uncle Maffeo; Marco Polo; Niku
Synopsis
Marco, his father and his uncle are given an audience with the new Pope. They are sent on a mission to satisfy a request from the Khan of Tartary for priests and men of learning.
Reprints

Scoop Scanlon, Five Star Reporter
Genre
adventure; detective-mystery
Characters
Rusty James (introduction); Scoop Scanlon (introduction); Arnold (villain)
Synopsis
An international jewel thief arrives in America as a prisoner, but Scoop and Rusty are on hand to witness his escape with the help of his gang lying in wait.
Reprints
Keywords
The Bulletin

First Line of Dialogue or Text
Having struck it rich in the oil fields of Texas, Tex Thomson has left his native country to tour the world.
Feature Logo

First Line of Dialogue or Text
Fred Astaire once sat in a booth during a benefit given in London, and danced with...
Feature Logo

Per Craig Delich, art MIGHT be by Sheldon Moldoff. Synopsis added by Delich.