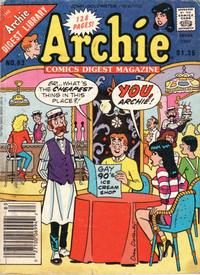 Learn While You Yearn (Table of Contents: 1)

They Went Thataway (Table of Contents: 3)

Genre
teen
Synopsis
Archie and the gang get into the western fad.
Reprints

Genre
children
Characters
Li'l Jinx; Greg; Charley Hawse
Synopsis
Greg breaks a movie date with Li'l Jinx, again, to play ball. But this time he claims to be sick, and a particularly rough game of football turned that lie into the truth.
Reprints

First Line of Dialogue or Text
I wish I could sleep as soundly as you!
Genre
teen
Characters
Veronica Lodge; Betty Cooper
Synopsis
Veronica can't sleep because she is worried about a blizzard.
Reprints

Credits from the printing in B&V Friends Double Digest Magazine (Archie, 2011 series) #249, no credits listed in this digest.

Voices of Change (Table of Contents: 8)

Genre
teen
Characters
Betty Cooper; Veronica Lodge; Mr. Weatherbee; Miss Grundy; Archie Andrews; Reggie Mantle
Synopsis
Veronica feels the social lives of the students are being negatively impacted by too much homework. So she goes to Mr. Weatherbee to get him to scale back homework assignments.
Reprints

Genre
teen
Characters
Archie Andrews; Betty Cooper; Veronica Lodge; Pop Tate; Dilton Doiley
Synopsis
Archie writes to a newspaper advice column for what to do about the Betty-Veronica love triangle. Things don't go so well for Archie when Betty and Veronica read the paper and determine who wrote the letter. When Archie finds out that the columnist is secretly none other than Dilton, he demands a retraction.
Reprints
Keywords
Advice column

The Lollipop Kid (Table of Contents: 12)

Genre
drama; teen
Characters
Archie Andrews; Betty Cooper; Veronica Lodge; Tony Mason; Satan (a black cat)
Synopsis
Betty, Veronica and Archie convince Tony Mason-- a big star-- to do a benefit concert to help save The South Street Clinic. But the day of the concert, he changes his mind. Archie, Betty and Veronica then convince the superstitious megastar of the errors in his judgement.
Reprints
Keywords
soap opera

This story is told in two parts.

Some Noggin Jogging (Table of Contents: 17)

Genre
teen
Characters
Archie Andrews; Jughead Jones; Reggie Mantle; Dilton Doiley
Synopsis
Archie tries to convince Jughead, Reggie, and then Dilton to go jogging with him. When they refuse, Archie jogs by himself, and causes mishaps along the way that convince several others to "jog" after him.
Reprints
Keywords
Jogging

Genre
teen
Characters
Dilton Doily; Archie Andrews; Reggie Mantle; Moose Mason
Synopsis
Archie tries to help out Dilton, who is smitten with a girl but too shy to talk to her face to face. But Reggie catches wind of it and sabotages the plan.
Reprints

The name of Dilton's object of desire was changed at the last minute from a six letter name to "Lori". This is apparent from the spacing of the name in the story's word balloons and the different style of lettering.

Genre
humor; teen
Characters
Veronica Lodge; Hiram Lodge; Archie Andrews
Synopsis
Tired of her extravagant spending on wardrobe, Mr. Lodge demands Veronica get more use out of the clothing she has.
Reprints

First Line of Dialogue or Text
I like my chili very hot! Is yours hot, Betty?
Genre
humor; teen
Characters
Betty Cooper; Archie Andrews
Synopsis
Betty demonstrates how hot her chili is.
Reprints

Writer, penciller and letterer credits from the reprint in Archie Double Digest (Archie, 2011 series) #306, no credits listed in this digest.

It's the Principal of the Thing (Table of Contents: 28)

Chills and Fever (Table of Contents: 31)

Genre
teen
Characters
Betty Cooper; Veronica Lodge; Archie Andrews
Synopsis
Betty and Veronica debate whether the cold weather is a state of physics or a state of mind.
Reprints

Genre
humor; teen
Characters
Archie Andrews; Jughead Jones
Synopsis
Archie has to shovel snow to make extra money. Jughead tells Archie that he only does work in the Spring and Fall when it's not too hot and not too cold.
Reprints