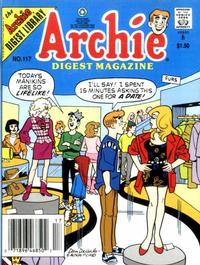 Straining Their Friendship (Table of Contents: 1)

Flight of Fancy (Table of Contents: 3)

Frank Doyle was credited with the script when the story was reprinted in Jughead's Double Digest #171.

First Line of Dialogue or Text
I just can't understand it
Genre
teen
Characters
Veronica Lodge; Archie Andrews
Synopsis
Archie has a special beach umbrella made to protect them from beach wolves.
Reprints

Genre
humor; western-frontier
Characters
The Marshal [Archie Andrews]; The Marshal's Deputy [Reggie Mantle]; The Marshal's Bride [Betty Cooper]; The Old Flame [Veronica Lodge]; Nasty McNasty [Big Moose Mason]; The Rowdy Boys
Synopsis
On the Marshal's wedding day, he vows to hang up his guns and turn in his badge. But when the word comes to town that Nasty McNasty and the Rowdy Boys are back in town, he has to figure out how to defeat them without any help-- or his guns!
Reprints

Genre
fantasy-supernatural; teen
Characters
Sabrina; Aunt Hilda; Aunt Zelda; Cousin Ambrose
Synopsis
Since Sabrina and her aunts have watched countless hours of courtroom television shows, they assume they can defend Cousin Ambrose in court when he is ticketed for jaywalking.
Reprints

Genre
humor
Characters
Li'l Jinx; Charley Hawse
Synopsis
Jinx guesses what Charley had for lunch from the stains on his shirt.
Reprints

Betty's Manual - The Care and Training of Pet Dogs and Pet Boyfriends (Table of Contents: 16)

Genre
humor; teen
Characters
Archie Andrew; Betty Cooper; Veronica Lodge; Reggie Mantle; Hiram Lodge; Mrs. Lodge; Jughead Jones
Synopsis
A huge new shopping mall has opened in Centerville. It is causing Mr. Lodge problems because the new mall is taking business away from the Riverdale Mall, where he is on the board of directors.
Reprints
Keywords
balloon; shopping mall

formerly a Life With Archie story.

Genre
humor; teen
Characters
Archie Andrews; Veronica Lodge; Betty Cooper; Jughead Jones; Reggie Mantle; The Archies; The Hip Hoppers [Claude; Raul]; Hiram Lodge
Synopsis
The disco where the Archies were going to perform burns down. They meet old friends, Claude and Raul, and they all perform in the parking lot of the Riverdale mall, bringing in a crowd that convinces Mr. Lodge that he has to change his business strategy to attract younger shoppers.
Reprints
Keywords
break-dancing; concert; disco; fire; shopping mall

Mr. Lodge quotes Bob Dylan at one point: "The times they are a-changing!"

The Angel Jones (Table of Contents: 25)

Recycling With Veronica (Table of Contents: 26)