Redrawn from the cover of Laugh Comics #121 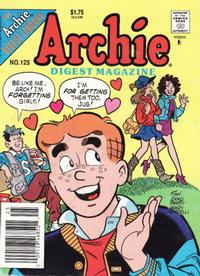 No credits given for gag. Art credit based on artist's distinctive style.

The Reward (Table of Contents: 6)

Genre
humor; teen
Characters
Archie Andrews; Jughead Jones; Veronica Lodge; Hiram Lodge; Hermione Lodge; Pop Tate
Synopsis
Looking after things while the Lodges are away, Jughead and Archie manage to ruin the garden. When he learns that now the garden club will NOT meet at his house, Mr. Lodge rewards the boys.
Reprints

Demand for Supply (Table of Contents: 8)

First Line of Dialogue or Text
Biff...how come I can never get my supplies on time?
Genre
humor
Characters
Fred Andrews; Biff
Synopsis
Fred wants to know why he can't order any office supplies.
Reprints

Inside Cheerleading (Table of Contents: 12)

The Blue Blahs (Table of Contents: 14)

Mix and Match (Table of Contents: 16)

Genre
teen
Characters
Mr. Weatherbee; Jughead Jones; Archie Andrews; Betty Cooper; Veronica Lodge
Synopsis
Mr. Weatherbee thinks that Archie and Jughead are having a disagreement because they are both on their best behavior.
Reprints

Number One Guy (Table of Contents: 18)

First Line of Dialogue or Text
On your feet, Archie! We're getting up a game of flog!
Genre
humor; teen
Characters
Archie 1; Betty 1; Veronica 1; Jughead 1; Reggie 1
Synopsis
The boys create a game called 'flog', but the girls think it's dumb so they create their own game, golf.
Reprints
Keywords
cavemen; golf

There's a backwards R in the title.

King for a Night (Table of Contents: 22)

The Kool-Aid jug is clearly seen on page 1. Kool-Aid was a sponsor of Archie Comics at the time.
Formerly an Archie and the Gang story.

Now Hear This (Table of Contents: 26)

Writing originally credited to Frank Doyle; actually one of the early '80s stories written by his daughter Claire.

First Line of Dialogue or Text
Hey, Reggie, I'll give you a buck if you open my locker for me!
Genre
humor; teen
Reprints