First Line of Dialogue or Text
Guess who they picked to be "principal for a day"!
Genre
humor; teen
Characters
Archie Andrews; Betty Cooper; Veronica Lodge 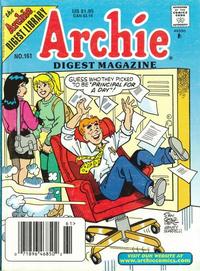 Genre
humor; teen
Characters
Archie Andrews; Jughead Jones; Reggie Mantle; Pop Tate
Synopsis
Pop Tate loans the boys the use of his cabin in the woods for a weekend.
Reprints

The Survivors (Table of Contents: 5)

Genre
humor; teen
Characters
Archie Andrews; Jughead Jones; Veronica Lodge; Betty Cooper; Svenson
Synopsis
Jughead and Archie go to school, not knowing that school had been cancelled due to the snowstorm. Luckily they help rescue a busload of girls who were headed to a dance.
Reprints
Keywords
blizzard

Look Who's Talking (Table of Contents: 7)

Credits from the reprint in Archie Double Digest (Archie, 2011 series) #276, no credits listed in this digest.

Credits from the printing in Jughead's Double Digest (Archie, 1989 series) #189.

Genre
humor; teen
Characters
Reggie Mantle; Betty Cooper; Veronica Lodge; Archie Andrews; Jughead Jones; Dilton Doiley; Cousin Edie
Synopsis
Reggie's practical jokes make everyone want to get back at him, until they hear he's been in an accident and is in the hospital -- but that's just another prank that his cousin, a nurse, helped him pull off.
Reprints

Feature logo changed from Reggie's Revenge to Archie and the Gang in this printing.

Credits from the index of the original printing, no credits are listed in this digest.

Genre
humor; teen
Characters
Archie Andrews; Jughead Jones; Veronica Lodge; Fred Andrews; Betty Cooper
Synopsis
First Archie doesn't have money to take Veronica out so he tells her he will be out of town, then he wins money in a radio contest so he tells her his plans changed. Then Fred wants the money Archie owes him so the date is back off until Archie runs into another windfall. Unfortunately expenses cost him that windfall but Veronica is done with his excuses.
Reprints

Genre
humor; teen
Characters
Archie Andrews; Reggie Mantle; Betty Cooper; Veronica Lodge
Synopsis
Archie learns that Veronica is sick and races to her side, barreling into Betty in the process. Betty and Reggie decide to get back at the two lovebirds by putting onion juice in Veronica's vaporizer, which causes both Veronica and Archie to bawl uncontrollably.
Reprints

Credits taken from the index for the reprint in Reggie's Revenge! (Archie, 1994 series) #1. No credits listed in this digest.

Toss and Turn (Table of Contents: 20)

Credits from the index of Reggie's Revenge! (Archie, 1994 series) #1, no credits are printed in this digest.

Illustration used as the title page of the next section featuring Explorers of the Unknown reprints.