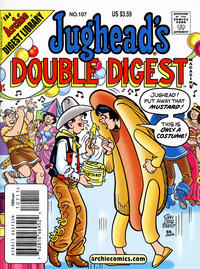 Vet You Bet (Table of Contents: 1)

The first two panels appear to be relettered from the original.

The Coney Island contest is based on the contest held yearly at Nathan's.

A Fetching Tail! (Table of Contents: 7)

The Mechanical Menu (Table of Contents: 10)

Take-Out and Deliver (Table of Contents: 21)

Genre
humor; teen
Characters
Jughead Jones; Reggie Mantle
Synopsis
Jughead fakes an injury to get Reggie to help him with his job of delivering Chinese food to customers.
Reprints

Credits from the reprint in World of Archie Double Digest (Archie, 2010 series) #93, no credits listed in this digest.

Genre
humor; teen
Characters
Archie Andrews; Veronica Lodge; Jughead Jones; Fred Andrews; Mary Andrews; Forsythe Jones; Gladys Jones
Synopsis
Archie and the gang see a UFO. They find a giant spaceman which is protecting a tiny spacecraft. The aliens fire a ray that temporarily makes Archie and Jughead so small, they are in danger from a frog.
Reprints

This Guy's Disguise (Table of Contents: 26)

Genre
teen
Characters
Reggie Mantle; Jughead Jones; Archie Andrews; Pop Tate; Veronica Lodge (cameo); Betty Cooper (cameo)
Synopsis
Reggie is sure that he can spot Jughead no matter what disguise he's wearing, but it turns out that he can still be fooled.
Reprints

The Detective (Table of Contents: 28)

Credits from the reprint in Jughead and Archie Double Digest (Archie, 2014 series) #18.

Just for Sprite (Table of Contents: 30)

Characters
Archie Andrews; Betty Cooper; Veronica Lodge; Jughead Jones; Reggie Mantle
Synopsis
The gang is putting on a play for charity. Jughead has to play a rabbit and after he puts on the costume, Archie tells him the zipper is stuck, even though it really isn't. There are a few hours before the play starts and Jug has to run some errands for his mom, panicking the town that a giant rabbit is on the loose.
Reprints

The Big Apple (Table of Contents: 37)

Spaced Out (Table of Contents: 41)

Tricks and Treats (Table of Contents: 45)