This All-Star was the first to have 56 interior pages. Internal evidences suggests the story was actually much longer, but panels were cut so that the story fell within the new War Production Board paper guidelines. The Editor's page features a Junior Justice Society of America code message in the Hawkman code. 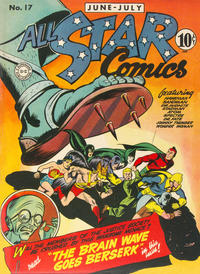 Husky - Co-Pilot of the Pilgrim (Table of Contents: 2)

Genre
superhero
Characters
Justice Society of America [The Sandman [Wesley Dodds]; Johnny Thunder; The Spectre [Jim Corrigan]; Dr. Fate [Kent Nelson]; Hawkman [Carter Hall]; Wonder Woman [Diana Prince] (Secretary); Dr. Mid-Nite [Dr. Charles McNider]; The Atom [Al Pratt]; Starman [Ted Knight]]; Brain Wave [Henry King, Sr.] (villain)
Synopsis
Wonder Woman informs the JSA that all the minutes of past meetings have been stolen. The scene then shifts back to the moment the Brain Wave jumped from his tower, supposedly to his death. He survived and invented a way using electricity and special substance to shrink the JSA to 8" tall! Meanwhile, Wonder Woman heads home to look for the minutes and after she leaves, the members find themselves shrunk to 8" in height, and Brain Wave enters, imprisoning each member in a cage. When Brain Wave leaves the room, Hawkman calls his hawks, who come and take the members away as Brain Wave watches.
Reprints

Genre
superhero
Characters
Hawkman [Carter Hall]; The Thunderbolt [Archibald] (cameo); Ted Purvis (JJSA member); Mr. Purvis (Ted's father); thugs (villains)
Synopsis
While flying along, Hawkman is captured by a JJSA member in a net, and he informs the young boy that his father is to be robbed by Brain Wave's men, so they head for the house, only to discover living tiny soldiers that are mixed in with the boy's regular toys. With a special yellow ray they regain their regular size and the Feathered Fury must come up with a different way of defeating the foe. As the Police arrive to arrest the thugs, Johnny Thunder's Thunderbolt shows up and takes Hawkman away.
Reprints

The Hawkman chapter was cut 2-3 pages from its original length and doesn't have a splash. Sheldon Moldoff said he purposely drew it that way, indicating he combined pages of Fox's script in order to shorten the chapter.

Genre
superhero
Characters
The Sandman [Wesley Dodds]; The Thunderbolt [Archibald] (cameo); Silk O'Mara (villain); O'Mara's thugs (villains)
Synopsis
Sandman is dumped out of his cage by the hawk who rescued him near a tree that grew money! Each $1 bill has a message on it to thugs connected with the Brain Wave, so he hides and awaits them. When they show, they read the bills, which tells them to take jewels from Riffanys. He follows them from the store and is able to whip them before a Policeman shows up to take them into custody. Then the Thunderbolt arrives to whisk him away.
Reprints

Genre
superhero
Characters
The Spectre [Jim Corrigan]; The Thunderbolt [Archibald] (cameo); Spider (villain); the Brain Wave's thugs (villains)
Synopsis
Brain Wave's thugs use a special gun that shoots indestructible spider webs at some guards protecting a safe in a person's home, which incapacitates them while they begin looting the safe. The Spectre arrives and takes on the crooks, but has a difficult time because of his size, so he rockets into outer space, finds a meteor and aims it toward the house where the crooks are looting the safe. It crashes and knocks the men out. As the Spectre is setting off an alarm for the Police, the Thunderbolt arrives and takes him away to Johnny Thunder.
Reprints

Genre
superhero
Characters
Dr. Fate [Kent Nelson]; The Thunderbolt [Archibald] (cameo); Lucky Luke (villain); the Brain Wave's thugs (villains)
Synopsis
The Brain Wave's minions, headed by Lucky Luke, are posing as plumbers in order to get into a bank to loot it. Doctor Fate shows up in time to trail the thugs back to Lucky's apartment, and he uses a typewriter to type out some bad news to Lucky. Noting that he has one more job to do, and it's Friday the 13th, Lucky decides to go through with the job, and Fate puts a stop to the plot just as the Thunderbolt shows up.
Reprints
Keywords
Chemical Bank and Trust Corporation

The Junior Justice Society of America (Table of Contents: 9) (Expand) /

Genre
superhero
Characters
Dr. Mid-Nite [Dr. Charles McNider]; Augustus Flack; Edward (Flack's butler); Dr. Charles T. Grant; Brain Wave [Henry King, Sr.] (villain, cameo); the Brain Wave's thugs (villains)
Synopsis
A special newspaper is delivered to Augustus Flack (and others), telling of "The Ace of Spades." Then an ace of spades card falls out with a note telling him where to take his blackmail money. Mid-Nite arrives and discovers the address to which the men are asked to bring their money, so he heads over to it, takes on the thugs under cover of his blackout bomb, and convinces the men that they have gotten lead poisoning from handling the papers Brain Wave had printed. They head over to a doctor that Charles McNider has recommended, and the doctor gases them and calls the Police.
Reprints
Keywords
Blackout Bomb; Daily Argus

This chapter was probably shortened by a page, as the panel showing the Thunderbolt coming to get Dr. Mid-Nite is missing.

This filler does NOT appear in the Archives.

Genre
superhero
Characters
Starman [Ted Knight]; The Thunderbolt [Archibald] (cameo); Brain Wave's thugs (villains)
Synopsis
Townspeople head over to Keller's Circus, which is putting on a free show for the people, a clever ruse by the Brain Wave because it leaves the town deserted and wide open to be robbed blind. While the people back at the circus have been gassed, Starman shows up and follows the crooks into town from the circus and takes them on until the Police arrive...and then Thunderbolt shows up to whisk him away.
Reprints
Keywords
Durham Bank; Gravity Rod; Keller's Circus

This chapter was shortened by a 1/3 of a page.

Genre
superhero
Characters
The Atom [Al Pratt]; The Thunderbolt [Archibald] (cameo); The Brain Wave [Henry King, Sr.] (villain, cameo); Crafty Connors (villain); Knuckles O'Grady (villain); Slipper Joe Dixon (villain)
Synopsis
The Atom witnesses many strange accidents and the victims, taken to a nearby hospital, just happen to be crooks of every description. He discovers that the Brain Wave has taught the men how to fake accidents in order to commit theft. The men, in spite of the Atom's attempts, escape from the hospital with a supply of radium and head for their hideout, followed by the Mighty Mite. He attacks the best he can until the Police arrive to arrest the thugs...and the Thunderbolt appears to take the Atom away.
Reprints

This chapter was probably shortened by one page.

Genre
humor; superhero
Characters
Johnny Thunder; The Thunderbolt [Archibald]; Senator Sebastian J. Graves (bank President and multi-millionaire); phony Senator Graves (villain); Brain Wave's thugs (villains)
Synopsis
Johnny arrives at the Keystone Hotel, ready to take on the Brain Wave's thugs, but lands head first and is knocked out. Inside the hotel, a phony Senator Sebastian Graves overpowers the real Senator and takes his place. Johnny attempts to intervene, but his small size presents a real challenge to him until he thinks to have the Thunderbolt make his full size again! Still, Johnny is captured, so he asks the Thunderbolt to get the rest of the JSA pronto!
Reprints
Keywords
Keystone Hotel; Say You

Genre
superhero
Characters
Justice society of America [Hawkman [Carter Hall]; The Atom [Al Pratt]; The Sandman [Wesley Dodds]; The Spectre [Jim Corrigan]; Dr. Fate [Kent Nelson]; Dr. Mid-Nite; Johnny Thunder; Starman [Ted Knight]]; The Thunderbolt [Archibald]; Brain Wave [Henry King, Sr.] (villain, death?)
Synopsis
The JSA saves Johnny and the Senator, then head over to the Brain Wave's tower at Sharktooth Bay. Brain Wave has wired explosives outside the tower to blow up the JSA as they arrive, but the Thunderbolt moves the explosives inside the tower and the Brain Wave accidentally blows himself up!
Reprints
Keywords
Sharktooth Bay

Wonder Woman does not appear in the conclusion.