Redrawn from the cover of Archie's Girls Betty and Veronica #232 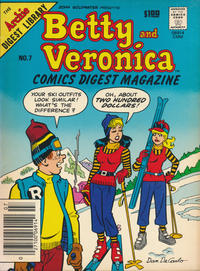 That's the Breaks (Table of Contents: 6)

Betty is wearing a body stocking in the first part of the story.

Bats In the Belfry (Table of Contents: 9)

I Believe In You (Table of Contents: 12)

Love and Stitches (Table of Contents: 13)

Genre
teen
Characters
Betty Cooper; Veronica Lodge; Archie Andrews; Smithers the butler
Synopsis
Betty gets up close and personal with Archie, using the excuse that she's measuring him for a sweater. Veronica decides two can play that game.
Reprints

Genre
humor; teen
Characters
Jughead Jones; Reggie Mantle; Dilton Doiley; Archie Andrews; Veronica Lodge; Betty Cooper; "Hunk" Cooper
Synopsis
Reggie is dismayed that the other guys are into needlepoint, until Betty introduces him to her cousin, a pro football player who is also into it.
Reprints

That Happy Feeling (Table of Contents: 19)

If the Spirit Moves You (Table of Contents: 22)

Genre
humor; teen
Characters
Archie; Reggie; Moose; Coach Kleats; Mr. Weatherbee
Synopsis
Archie and the rest of the basketball team celebrate both flower power and the spirit of Christmas by handing out flowers and being ultra-polite. Coach Kleats wants to see more aggressiveness, and assumes that Riverdale will lose the next game. Despite his fears, the team plays better than ever and wins.
Reprints
Keywords
basketball; Christmas; flower power

Designated in title block as a Coach Kleats story.

At the end, the opposing team seems to have caught on.

Genre
humor; teen
Characters
Betty Cooper; Veronica Lodge; Geraldine Grundy; Waldo Weatherbee
Synopsis
After he sees Miss Grundy talking to the girls like a drill sergeant, Mr. Weatherbee tells her to be a pal to her students.
Reprints
Keywords
dancing; The Twist

This title is often seen in War-related comic stories

A Run for Your Money (Table of Contents: 28)

Unsigned and uncredited in this reprint

First Line of Dialogue or Text
I wonder what I should get for Archie!
Characters
Betty; Veronica
Reprints
Keywords
Christmas

A Christmas Story or What the Dickens??? (Table of Contents: 34)

Parts of this story were adapted from "A Christmas Carol" by Charles Dickens.

In the Future Christmas, Archie has evidently married Betty and Jughead has married Ethel.