According to the Overstreet Comic Book Price Guide, 30,000 copies of this issue were destroyed in a fire in Winnipeg. According to Comic Book Daily, which cites a lower figure of 10,000-20,000 copies destroyed, it was a warehouse storing the comics awaiting bagging in late 1975. (http://www.comicbookdaily.com/collecting-community/undervalued/undervalued…).

These dates were provide in an email from Richard Comely to Jay Williams (fcssoccerjw@aol.com) on Feb 7, 2015. Richard stated that issues number #1 was released in May 1975 with a cover date of July 1975. Issue #2 was released about 4 months later and issue #3 was released 4 to 5 months after that. #3 has a copyright date of 1975 but actually hit the stands in early 1976. 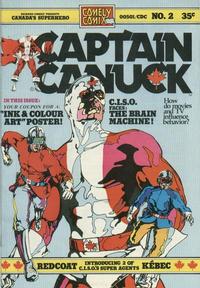 The Brain Machine (Table of Contents: 2)

The Lost City of Molan (Table of Contents: 4)

How Do Movies and TV Influence Behavior? (Table of Contents: 5)