First Line of Dialogue or Text
Mirror, mirror on the wall who is the fairest of them all?
Genre
teen
Characters
Veronica Lodge; Betty Cooper 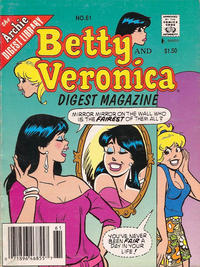 The Big Apple (Table of Contents: 4)

The Bookworms (Table of Contents: 6)

Genre
teen
Characters
Betty Cooper; Archie Andrews; Miss Grundy; Reggie Mantle; Veronica Lodge; Mr. Weatherbee
Synopsis
Miss Grundy assigns Betty and Archie to weed out the unusable books from the library stacks. Because they were excused from class to do this, Reggie and Veronica plot a prank out of vengeance.
Reprints

Genre
humor; fantasy-supernatural; teen
Characters
Sabrina; Aunt Hilda; Aunt Zelda; Della The Head Witch
Synopsis
Della allows Sabrina and her aunts to take a winter vacation to Hawaii, but only if they cause magical mischief while there.
Reprints

Genre
humor; teen
Characters
Betty Cooper; Mrs. Cooper
Synopsis
Betty is upset that no boys were in the list of people who called for her while she was out.
Reprints

First Line of Dialogue or Text
How do you like Jughead's oil painting, Ethel?
Genre
humor; teen
Reprints

A Mouthful (Table of Contents: 15)

This could be from Archie Giant Series Magazine (Archie, 1954 series) #205 but needs confirmation.

Tell Us About Recycling PET Plastic Containers (Table of Contents: 19)

The Chess Master (Table of Contents: 22)

The Big Payoff (Table of Contents: 23)

Safe and Solid (Table of Contents: 29)

Genre
humor
Characters
Li'l Jinx; Greg
Synopsis
Jinx has a unique way of testing whether a frozen pond is safe for skating.
Reprints

Tear on the Dotted Line (Table of Contents: 32)

Genre
teen
Characters
Betty Cooper; Veronica Lodge; Midge Klump; Archie Andrews
Synopsis
Livid that Betty is wearing the same style of dress to school that she is, Veronica manages to tear the dress. Undaunted, Betty mends the hem in the sewing room and actually manages to outdo Veronica.
Reprints