Redrawn from the cover of Laugh Comics #327. 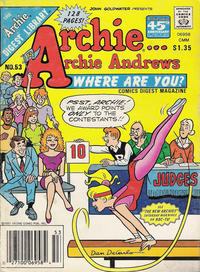 Let's Hear One for the Bee (Table of Contents: 1)

The New Look (Table of Contents: 8)

Original printing of this story credits Frank Doyle as scripter.

Critic at Large (Table of Contents: 9)

Previous indexer credited DeCarlo, but is clearly by Bolling.

Genre
humor; teen
Characters
Archie Andrews; Jughead Jones; Reggie Mantle; Betty Cooper; Veronica Lodge; Midge Klump
Synopsis
The boys give up one sport after another when Jughead shows them that there are hand-held video games that are more fun than the real thing. The girls come up with one game that can't be replaced by a computer simulation: kissing.
Reprints

When reprinted in World of Archie Double Digest (Archie, 2010 series) #36, story is credited to Mike Pellowski, pencils are credited to Tim Kennedy and inks to Henry Scarpelli. The credits in the digest are probably incorrect, as this would be eight years earlier than the earliest known Tim Kennedy artwork, both in the GCD and from the Who's Who, and does not look like Tim Kennedy's pencils in other stories from that digest that are confirmed to be by Tim Kennedy.

Genre
teen
Characters
Archie Andrews; Jughead Jones; Betty Cooper; Veronica Lodge
Synopsis
When the girls complain about always having to cook for the boys, Archie and Jughead offer to make it up to them.
Reprints

Genre
humor; teen
Characters
The Archies [Archie Andrews; Jughead Jones; Reggie Mantle; Betty Cooper; Veronica Lodge]; Cheryl Blossom; Jason Blossom; Cedric
Synopsis
Cheryl Blossom gets the Archies a gig at Pembrooke's most exclusive and high-paying club, but in exchange, she demands a guest shot with the group. During the gig, Cheryl tries to make up for her lack of singing talent with a skimpy outfit and sexy gyrations, shocking even her brother Jason.
Reprints

Genre
humor; teen
Characters
Archie Andrews; Jughead Jones; Reggie Mantle
Synopsis
Archie becomes convinced that this is a time of year when weirdos and wise guys are compelled to come up to him and make stupid jokes. So he disguises himself as an old woman to avoid weirdos.
Reprints