Redrawn from the cover of Archie #279. 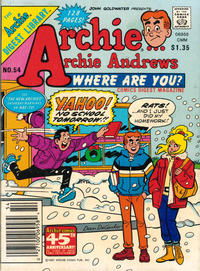 Feature changed from "Betty & Me" in the original printing to "Reggie" in this printing.

Till We Meet Again (Table of Contents: 11)

Your Big Chance (Table of Contents: 15)

Of Fraud and Friendship (Table of Contents: 17)

Genre
teen
Characters
Veronica Lodge; Archie Andrews
Synopsis
Archie feels that a man should be the senior partner in a relationship.
Reprints

Genre
teen
Characters
Betty Cooper; Veronica Lodge; Hiram Lodge; Smithers the butler; Hermione Lodge
Synopsis
Betty and Veronica engage in a snowball fight. But Veronica can't hit the broadside of a barn without some coaching from her father.
Reprints

Credits confirmed with the credits printed in Betty and Veronica Double Digest Magazine (Archie, 1987 series) #209, except for colorist credit which is not listed.

Genre
teen
Characters
Archie Andrews; Jughead Jones; Pop Tate; Reggie Mantle
Synopsis
Archie and Jughead convince Pop to let them erect a Christmas tree in front of the store, then cut down the biggest tree they can find.
Reprints

Genre
teen
Characters
Archie Andrews; Reggie Mantle; Veronica Lodge
Synopsis
Archie is as inept on an indoor practice slope as he is on an actual one.
Reprints

The Claus Cause (Table of Contents: 37)

The Rise and Fall (Table of Contents: 38)

First Line of Dialogue or Text
Betty, your mother and I are snowed in at your Aunt Kitty's! We probably won't be able to drive back until late tomorrow!
Genre
humor; teen
Characters
Betty Cooper; Hal Cooper; Alice Cooper; Archie Andrews
Synopsis
Betty's parents are stuck at her aunt Kitty's so Betty has to find a Christmas tree for only $10.
Reprints
Keywords
Christmas; Christmas tree

Credits from the reprint in B&V Friends Double Digest Magazine (Archie, 2011 series) #265, no credits listed in this digest.