Redrawn from the cover of Archie #284. 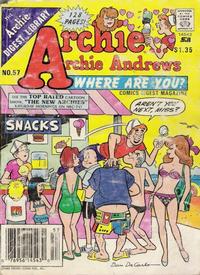 The Final Test (Table of Contents: 1)

Stairway to the Stars (Table of Contents: 6)

Genre
teen
Characters
Betty Cooper; Veronica Lodge; Hiram Lodge; Smithers the butler; Archie Andrews; Jughead Jones
Synopsis
Veronica has the decorative post on the staircase banister removed so she and Betty can slide down it.
Reprints

Genre
humor; teen
Characters
The Archies [Archie Andrews; Jughead Jones; Betty Cooper; Veronica Lodge; Reggie Mantle]; Cheryl Blossom; Jason Blossom
Synopsis
In another plot to humiliate the Archies, Cheryl Blossom gets Jason to steal her a dress that Veronica designed so she can wear it herself. But Cheryl doesn't realize that while Veronica is a good designer, she's a terrible seamstress.
Reprints

In the original version of this story, Cheryl is wearing nothing under the dress when it falls apart (with her arm strategically concealing this fact). In a digest reprint, the panels were re-drawn so she had a slip on.

When reprinted in Archie & Friends Double Digest (Archie, 2011 series) #29, writing is credited to George Gladir and pencils are credited to Dan DeCarlo Jr.

The Uninvited (Table of Contents: 13)

Genre
fantasy-supernatural; teen
Characters
Sabrina; Harvey; Aunt Hilda; Cousin Ambrose
Synopsis
Harvey tags along on a family outing, not realizing that Sabrina and her family are headed to an outing for witches.
Reprints

A Little Bull (Table of Contents: 17)

Genre
humor; teen
Characters
Jughead Jones; Ethel Muggs
Synopsis
Jughead comes across a shark while scuba-diving. When he comes onto the dock and Ethel is there to greet him he retreats back into the shark infested water.
Reprints

Genre
teen; fantasy-supernatural
Characters
Sabrina; Aunt Hilda; Cousin Ambrose; Della The Head Witch
Synopsis
Hilda disapproves of Sabrina's bikini and uses her magic to keep the girl from wearing it. Then Hilda gets a dose of her own medicine.
Reprints

Genre
teen
Characters
Bingo Wilkin; Samantha Smythe
Synopsis
Bingo and Samantha come up with a system to handle other guys hitting on her at the beach.
Reprints

The Gamblers (Table of Contents: 35)

Genre
humor; teen
Characters
Josie and the Pussycats [Josie McCoy; Melody Valentine; Valerie Brown]; Alexandra Cabot; Sebastian
Synopsis
The Pussycats pool their money for a weekend at a luxurious resort hotel. Alexandra secretly follows them and uses her witchcraft to cause them to have accidents, and then, to ruin their weekend completely, she turns all their cash into play money.
Reprints

Genre
teen
Characters
Moose Mason; Betty Cooper; Archie Andrews
Synopsis
Moose will fight anybody who tries to knock down his sand castle, including the tide.
Reprints