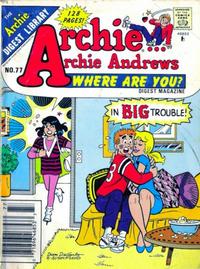 Genre
humor; teen
Characters
Jughead; pizza chef (dream character)
Synopsis
Jughead dreams that he can't buy a pizza because he's out of money. He wakes up, takes some money from his pocket, and dreams again, this time with success.
Reprints
Keywords
chef; dream; pizza

Genre
humor; teen
Characters
Betty; Veronica
Synopsis
Betty is so angry, she's no longer speaking to Archie. She runs right over to his house to tell him so.
Reprints

Genre
humor; teen
Characters
Jughead Jones; Reggie Mantle; Archie Andrews; Waldo Weatherbee
Synopsis
Reggie vows to master a pogo stick because it seems to be the one thing Jughead can do better than he can.
Reprints
Keywords
fourth wall; pogo stick; stairs

Breaking of fourth wall on page two when Reggie crashes into a panel border, breaks it and falls into the next panel.

In the Dread of Night (Table of Contents: 14)

Only Trying to Help (Table of Contents: 15)

Genre
teen
Characters
Archie Andrews; Betty Cooper; Moose Mason; Jughead Jones
Synopsis
Moose wants Archie to punch him to test his strength but everyone knows it's Archie who will get hurt.
Reprints

The Natural (Table of Contents: 18)

Genre
humor; teen
Characters
Archie Andrews; Jughead Jones; Veronica Lodge; Reggie Mantle
Synopsis
Archie declares that he's going to "play it cool" where Veronica is concerned, while Jughead calmly predicts that his buddy will just make a fool of himself as usual.
Reprints

The credits for the reprint in Jughead's Double Digest (Archie, 1989 series) #196, Harry Lucey is credited with the inks on this story.

Genre
teen
Characters
Archie Andrews; Veronica Lodge; Hiram Lodge; Smithers
Synopsis
Veronica is angry with Archie because he doesn't have any money to take her out, but his cheap suggestion for fun angers Mr. Lodge and Smithers too.
Reprints

First Line of Dialogue or Text
Rebel, let's leave our bones here!
Genre
humor
Characters
Hot Dog; Rebel
Synopsis
Hot Dog thinks it will be safe for him and Rebel to leave their bones where another dog can watch them.
Reprints

Along the Video Trail (Table of Contents: 29)

First Line of Dialogue or Text
This is such a pretty outfit!
Genre
humor; teen
Characters
Betty; Veronica
Synopsis
Betty has a dress with a loose flyaway skirt; she only wears it on windy days.
Reprints
Keywords
autumn; fashion

Genre
humor; teen
Characters
Archie
Synopsis
Archie can't sleep, so he gets up to read, then falls asleep in his chair over his math book.
Reprints
Keywords
insomnia

First Line of Dialogue or Text
Egad, Archie! What's that on your leg?
Genre
humor; teen
Characters
Archie Andrews; Jughead Jones; Waldo Weatherbee
Synopsis
In showing off his cast, Archie does more damage to Mr. Weatherbee than he did to his foot.
Reprints