Indicia title: Archie... Archie Andrews, Where Are You? Digest Magazine. Cover is the same except missing the comma.
This issue has variants: 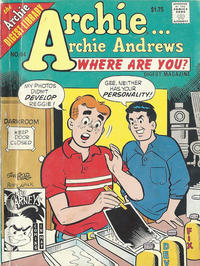 The Ice Maven (Table of Contents: 1)

Wanye Kletzky is a parody of the famous hockey player Wayne Gretzky.