Sidonie M. Gruenberg is listed as being affiliated with the Child Study Association of America, Inc. 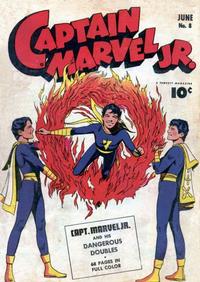 In This Issue (Table of Contents: 1)

Table of contents with illustrations and a listing of the Editorial Advisory Board. Indicia at bottom of the page.

Editorial Advisory Board listed as: Eleanor B. Roosevelt (listed as past President of the Girl Scouts Council of Greater New York [and at the time, First Lady of the United States, but not noted]); Rear Admiral Richard E. Byrd (listed as "noted explorer, aviator, and author"); and Allan Roy Dafoe, M.D. (listed as "the famous quintuplet doctor").

His Dangerous Doubles (Table of Contents: 2)

The Predictions of Peril (Table of Contents: 3)

The Conquerors From the Grave (Table of Contents: 7)