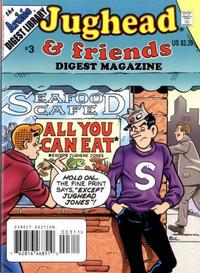 The Lure (Table of Contents: 1)

Genre
humor; teen
Characters
Jughead Jones; Reggie Mantle
Synopsis
Reggie is having a cookout for his elite list of associates - of which Jughead is not one.
Reprints

Writer credit changed based on credits given in Jughead's Double Digest (Archie, 1989 series) #173.

Credits from the reprint in Jughead's Double Digest (Archie, 1989 series) #199. No credits listed in this digest.

Taking the Pledge (Table of Contents: 5)

The Lifesaver (Table of Contents: 8)

Genre
teen
Characters
Bingo Wilkin
Synopsis
Bingo tries to be a lifeguard but gets beaten up for his trouble.
Reprints
Keywords
lifeguards; swimming

Inventing We Will Go.. (Table of Contents: 9)

This is a remake of a story from Jughead #62 (July 1960), "Dimension Invention." It uses the same script almost word-for-word, and even uses the same name, Herman, for Jughead and Bingo's uncles.

Though Samantha appears in the story, she has no lines, because the script this is based on had only two characters (Jughead and Uncle Herman), and all their lines go to Bingo and Uncle Herman, respectively.

This is the first appearance of Bingo's Uncle Herman. His design is completely different from Jughead's uncle of the same name, though in later comics, this Uncle Herman would become Jughead's as well (thus making Bingo and Jughead into cousins).

Smoothing Things Over (Table of Contents: 11)

A Weighty Matter (Table of Contents: 12)

Genre
humor
Characters
Archie Andrews; Jughead Jones; Betty Cooper; Veronica Lodge; Mary Andrews
Synopsis
Archie needs to lose weight to get back into his weight class for the wrestling team but is tempted by food everywhere he goes.
Reprints

Genius at Work (Table of Contents: 13)

Back Trouble! (Table of Contents: 15)

Pamela Biltmore, star of Beach Rangers is based slightly on Pamela Anderson, star of Bay Watch.