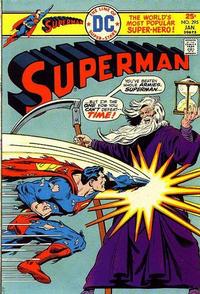 Costume, Costume-- Who's Got the Costume? (Table of Contents: 1)

Job Number
S-2098
Genre
superhero
Characters
Superman [Clark Kent]; Green Lantern [Xenofobe; also as Father Time]; Jimmy Olsen; Josh Coyle; Lois Lane; Jaxon the Mighty; Legion of Super-Heroes [Mon-El; Duo Damsel; Invisible Kid [Lyle Norg]; Element Lad; Saturn Girl; Cosmic Boy]; Time Trapper (behind the scenes); Madame Olga
Synopsis
Father Time steals Superman’s costume and Superman follows it to 2975, a future unlike the future he knows, an “Earth after disaster.” There, Superman meets Jaxon, who wears his costume and the two battle until they end up back in 1975. Father Time arrives and reveals that he is a Green Lantern from the 30th century. He explains that the Time Trapper eliminated all the other possible timelines, leaving only the one in which civilization is destroyed by a Great Disaster, so he pitted Superman against Jaxon so that the energy their fight generated could restore all of the possible futures.
Reprints
Keywords
Fortress of Solitude

The Green Lanterns’ battle with the Time Trapper must have been earlier than contemporaneous Legion stories, as Duo Damsel (retired) and Invisible Kid (deceased) are shown as active members. This story was part of a larger attempt by DC to explain their two primary timelines. See The Amazing World of DC Comics (DC, 1974 series) #12.