Jaws of the Killer Shark! (Table of Contents)

Cover is an homage to the poster for the Steven Spielberg film, "Jaws". Colors credit provided by Anthony Tollin. 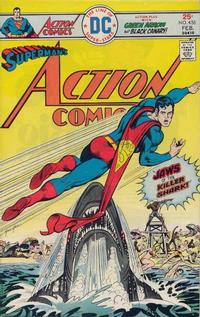 Jaws of the Killer Shark! (Table of Contents: 1)

Bail Out the Nutty Kid (Table of Contents: 4)

Job Number
S-2150
Genre
superhero
Characters
Green Arrow [Oliver Queen]; Black Canary [Dinah Lance]; Danny Harris
Synopsis
Green Arrow and Black Canary try to rescue a telethon host from kidnappers dressed as clowns. But while Green Arrow stops some of them, the clowns get the drop on Black Canary in their helicopter!
Reprints

Danny Harris is a parody of comedian Jerry Lewis.