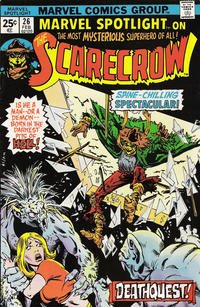 Death Waters of the River Styx (Table of Contents: 1)

This story is continued between Dead of Night #11 and Marvel Two-in-One #18.

Editorial reply notes that the Scarecrow story appearing in this issue was originally scheduled to debut in its own title but slipping sales on the mystery line cancelled those plans. Includes Marvel Value Stamp #23 (a portion of the cover to Doctor Strange #1).