The Road to Civil War (Table of Contents) 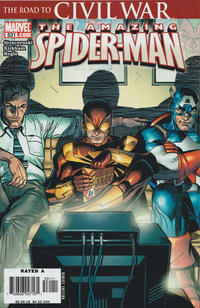 Genre
superhero
Characters
Titanium Man; Spider-Man [Peter Parker]; Iron Man [Tony Stark]; Senator Dickerson; Mary Jane Parker
Synopsis
Spider-Man drives off Titanium Man and keeps him from killing Tony. After the battle, Tony once again appears before the Senate concerning superhuman registration and this time, Spider-Man himself testifies. Unbeknownst to Peter, he has been played by his new mentor as Iron Man pays Titanium Man off for the fortuitous attack. With the registration bill still up in the air, Tony and Peter return home to the news of the Stamford disaster.
Reprints
Keywords
Civil War [Marvel]