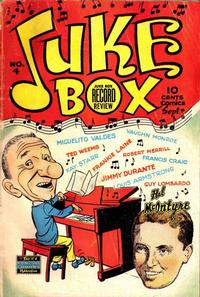 Inside front cover. Indicia is on this page.

Characters
Frankie Laine
Synopsis
Frankie relives some of the rough times he had during his singing career.
Keywords
celebrity

Your Record Review (Table of Contents: 5)

Unable to put a last name to this artist. The style is from the "Caniff" school popular at this time. There are swipes from Bob Oksner, Gil Kane, Lee Elias and others.

Characters
Jimmy Durante; Al Durante; Eddie Cantor; Eddie Jackson; Lou Clayton
Synopsis
The story of how Jimmy went from being a helper in his dad's barber shop to a top-rated piano player and entertainer.
Keywords
celebrity

The splash page for this story is used as part of the cover of this issue.

First Line of Dialogue or Text
Of course mother wanted to make my gown for me...
Genre
teen
Characters
Jivey; Groovy; Hail Storm; Teddy Turtle
Synopsis
Groovy's tomboy cousin Hail, causes quite a stir when she goes to the dance with Jivey.

Cavalcade of Jazz (Table of Contents: 12)

The Story behind the Song (Table of Contents: 13)

Based on the ink lines, this may be early work by John Giunta, but there are no definite examples of known early Giunta to compare this with.

Robert Merrill of the Diamond Horseshoe (Table of Contents: 14)

Hal McIntyre and the Ghost of IaHuy (Table of Contents: 15)

Characters
Hal McIntyre
Synopsis
Hal and a friend solve the mystery of a ghost at a French castle.
Keywords
celebrity

Different inking style for the artist. There are three signed stories in this issue, and even though layouts are similar, the inking styles are different but could be the same artist. Cross-hatching indicates this story may have been intended to be in black and white. Still need a positive ID for this artist.