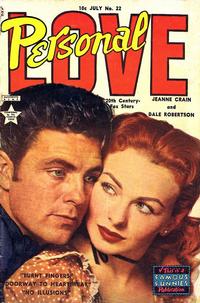 The Girl Next Door Lovely Jeanne Crain (Table of Contents: 1)

Genre
romance
Characters
Charley; Gary; Marge; Tim
Synopsis
Margie supports her younger brother Tim after their parents’ deaths. Although Margie loves fireman Gary, she won’t marry him until he can afford to move away from their poor neighbourhood. Margie dates free-spending Charley, then discovers he’s an arsonist for hire. Margie doesn’t denounce him to the police, but when he sets fire to an occupied apartment building, she tells Gary. Margie dashes into the burning edifice and rescues a woman and child. She and Gary reconcile.

The Man She Married (Table of Contents: 3)

Genre
romance
Characters
Brad Mason; David Cornel; Mr. Talbot; Mrs. Talbot; Violet Talbot
Synopsis
Wealthy Violet is courted by famous athlete David and doctor Brad. When she sees Brad refuse to fight David, Violet decides he’s a coward and chooses David. However, Brad risks his own life to rescue Violet’s father and Violet from a burning stable. He later explains that he didn’t fight because his hands were too valuable to risk injury to them. Violet will marry Brad.

Doorway to Heartbreak (Table of Contents: 4)

Genre
romance
Characters
Blanche Cummings; Johnny Marsden; Mrs. Marsden; Al Jennings(villain); Mr. Marsden
Synopsis
Blanche is released after a year in prison and moves to a new town for a fresh start. A boarder in the Mardsen home, she meets Johnny but rejects his romantic advances because she fears revealing her past. Blanche dates Al, and he asks her to hide some “hot” jewelry. She puts it in Johnny’s room and Johnny is arrested. Aware of her past, Johnny doesn’t denounce her, but Blanche confesses everything. Johnny is cleared and he and Blanche can be together.

No Illusions (Table of Contents: 5)

Genre
romance; sports
Characters
Billy; Carrie; Jean; Timmy; Tom Shaw
Synopsis
Jean supports her younger brothers by running a lunchroom. Her brother Timmy requires “special attention” due to his weak health. Timmy idolises Tom, a former professional baseball player. Jean plans to marry Tom so Timmy will have “some sort of father,” but Tom prefers Carrie. Tom actually works in a gas station now, and Jean reveals this. Timmy falls into a depression; Jean tries to find Tom, but he and Carrie have married and moved away. Jean swallows her pride and has her story printed in a newspaper. Tom and Carrie return: Tom is now a baseball coach and Timmy will get better.
Keywords
baseball