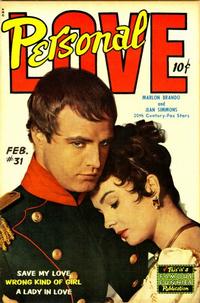 Come on, Buddy, Quit Being a Bag-of-Bones Weakling Like I Was (Table of Contents: 1) (Expand) /

Genre
romance
Characters
Bill; Dan; Karen
Synopsis
Model Karen loves illustrator Dan but he believes she’s just “the slick, glamourous type.” Fellow artist Bill thinks otherwise and paints her as a “small town girl.” This convinces Dan that he was wrong about her. Both Dan and Bill profess their love for Karen: she chooses Bill.

Genre
romance
Characters
Clay; Jerry Cannon; Lorene; Sharon
Synopsis
After her father dies, ranch foreman Clay advises Sharon to turn the property into a dude ranch. The business is successful, helped by the presence of bandleader Jerry and his vocalist Lorene. Jerry romances Sharon, but she learns he is already married to Lorene and is just scheming to take control of the ranch. Sharon realizes Clay is the man she’s always loved, and he reciprocates her affection.

The Student (Table of Contents: 6)

Save My Love (Table of Contents: 8)

Genre
romance
Characters
Enid; Frank; Joe; Leo
Synopsis
Fisherman Leo and Enid were childhood sweethearts, and she finally accepts his marriage proposal. Diver Frank takes a job with his old Navy pal Leo’s outfit: he and Enid fall in love, but doesn’t want to hurt Leo. Leo finds out and is angry, but when Frank goes missing trying to rescue some other salvage divers, Leo saves him. Leo gives Enid and Frank his blessing.

Genre
romance
Characters
Betty Carter; Skid
Synopsis
Arrogant foreign correspondent Betty hires Skid to fly her to the “Far East,” but their plane crashes on a Pacific island. Betty panics when she sees some “natives” and rushes into Skid’s arms. He says they’re friendly and will take them to civilization. Betty and Skid’s adventure has made them fall in love.

[Statement of the Ownership, Management, Circulation, Etc.] (Table of Contents: 13)

Who am I? / comic story / 2 pages (report information)

Although in the story the acting group Holliday was part of is referred to as "Six and Company," it was actually "The Revuers" and consisted of five people (Holliday, John Frank, Alvin Hammer, Adolph Green, and Betty Comden). The comic story refers to "we" but none of the other members are identified.

Look at the Prized Stamp I Found (Table of Contents: 15) (Expand) /