The Marriage of Batman and Batwoman! (Table of Contents) 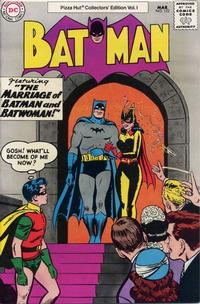 Prisoners of the Sargasso Sea (Table of Contents: 2)

Genre
superhero
Characters
Batman [Bruce Wayne]; Robin [Dick Grayson]; Blackjack; Capt. Jolly Roger; Erik; Flavius
Synopsis
While chasing a modern-day pirate, Blackjack, Batman and Robin are marooned in the Sargasso Sea. There they discover others who have been trapped for centuries by the seaweed and its strange age-defying gas, and with the help of these men they destroy Blackjack's weapons and escape in a repaired Batplane.
Reprints

This sequence replaces a Tootsie Roll ad in Batman #122.

For some reason the order of this sequence and the "Block Buster" sequence was switched from the original order in Batman #122. The indexer of Batman #122 also notes the page is signed by Boltinoff, but it is not signed in this printing.

The Villain from Batman's Past! (Table of Contents: 6) (Expand) /

First Line of Dialogue or Text
There's nothing square about this!
Characters
unnamed police officer
Reprints

Word puzzle with answer. For some reason, the order of this sequence and the "Strange Old Laws" sequence was switched from that in Batman #122.

First Line of Dialogue or Text
Which king of England was unable to speak English?
Genre
non-fiction
Synopsis
Facts about England's King George I and the Grand Canyon.
Reprints

This sequence replaces a Tootsie Roll Pop ad in Batman #122.

Double-Dealer in Diamonds (Table of Contents: 10)

Genre
crime
Synopsis
Jewelry thief uses the tactic of buying expensive jewelry, passing it to an accomplice, then placing an order for an exact copy. The jeweler searches the country and unknowingly finds his original piece, which he buys for a premium from the accomplice, and when he goes to deliver it the buyer has disappeared. The thief has by then pocketed the difference in price.
Reprints

First Line of Dialogue or Text
The siren! Someone escaped!
Genre
humor
Characters
Warden Willis; prisoner 7416; prison guard
Synopsis
A prisoner is attempting an escape but Warden Willis, knowing the prisoner was a vaudeville actor, traps him in a spotlight.
Reprints

Index for Batman #122 says the page is signed by Boltinoff, but it is not in this printing.

The Family Favorite! (Table of Contents: 12)

Genre
advocacy
Characters
Harry; Jimmy; Harry and Jimmy's mother
Synopsis
Both Harry and Jimmy think the other brother is their mom's favorite, leaving her at a loss as to how to handle the boys.
Reprints

The Marriage of Batman and Batwoman (Table of Contents: 13)

Genre
superhero
Characters
Batman [Bruce Wayne]; Robin [Dick Grayson]; Batwoman [Kathy Kane]
Synopsis
Dick Grayson goes to sleep while Bruce is out on a date with Kathy, and dreams of the loss of their secret identities caused by Bruce and Kathy's marriage.
Reprints

First Line of Dialogue or Text
Sis -- I traded this for you!
Genre
humor
Reprints

Four one-panel gags. This sequence is not in Batman #122.

Information on this comic, noting it is one of six reprints available free from Pizza Hut.
On back cover.