This Man Belongs to Texas! (Table of Contents) 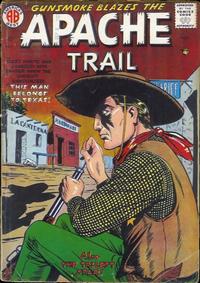 Start to Play Real Music on the Harmonica in 15 Minutes Flat! (Table of Contents: 1) (Expand) /

The Tallest Spar! (Table of Contents: 8)

Genre
western-frontier
Characters
Missy Lil Peters; Rita Adams; George (Rita and Missy Lil's brother); Sandy Diamond; Bush Peters; Sandy Diamond
Synopsis
Missy Lil Peters and Rita Adams are sisters. Lil is left in charge when their brother George leaves town for a few days. Bush Peters, a thug spurned by Missy Lil, gets a kerchief from her. He and his gang secretly watch as Sandy Diamond, a man wanted by the law, and Rita are kissing. Sandy swears off crime and asks Rita to marry. He is followed by Bush's gang and taken prisoner. He is told to play dead and hold Li's kerchief while Rita rides up. Bush convinces Rita that Lil killed Sandy. Lil says it was Bush's doing. The gang using the scene to rob the bank. Lil cleans up the gang.
Reprints

Originally untitled with the first line being, "There is no fury like the fury of a woman who is out to exact revenge..."

This Man Belongs to Texas! (Table of Contents: 14)

Now You Can Train Yourself for Top Pay in Auto Mechanics (Table of Contents: 19) (Expand) /