The Big Reward! (Table of Contents) 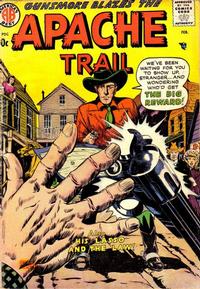 His Lasso and the Law! (Table of Contents: 1)

Genre
western-frontier
Characters
Johnny Cash; Jake Toomey; Sag Sawyer; Rupe Hedge; Prince (Cash's horse)
Synopsis
Johnny Cash finds himself holding the bag when he is embroiled in a bank robbery while trying to cash a check. Johnny is knocked out by the robbers, Sag Sawyer and Rupe Hedge. They leave a bag of money to frame him, and Cash is arrested. He's placed in the jail with Jake Toomey, whom Cash captured earlier when in disguise. Cash gets the keys and escapes, leaving Jake behind to serve his time. Cash finds the hideout of Sag and Rupe and busts them using his trick lariat.
Reprints

Aside of changing the surname of Johnny Lash to Cash, Johnny Cash is not called The Whip anywhere in the story. When in costume, he is known as Johnny Cash. He uses a rope lariat in lieu of a whip. The name of the horse is changed from Diablo to Prince.

The Big Reward (Table of Contents: 2)

Sound the Drums (Table of Contents: 4)

The Time of the Hunt! (Table of Contents: 5)