Mark of the Scarab (Table of Contents) 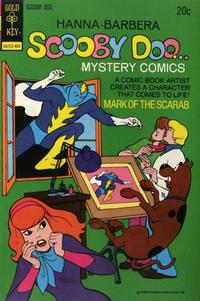 Mark of the Blue Scarab (Table of Contents: 1)

Mark Evanier reused this plot for "The Scarab Lives!," the first episode of the TV show "Scooby-Doo and Scrappy-Doo" in 1979

Genre
humor; detective-mystery
Characters
Scooby Doo; Shaggy; Velma; Daphne; Fred; Leo Mandrell; Mr. Shuster; Brad; the Gorilla Spirit
Synopsis
Scooby finds a cave and falls in a hole where an archaeologist named Brad is searching for the Anthro-stone. Scooby, digging to see what he hit his head on, discovers the artifact. With the gang in tow Brad takes the tablet to Leo Mandrell, who he hopes will translate the stone. Mr. Shuster, a competitor, arrives and offers Brad three thousand dollars for the stone, but he refuses. The next morning the gang arrives at Mandrell's office only to find it locked. Fred breaks down the door; Mandrell has apparently been turned into a chimpanzee and the Gorilla Spirit threatens Shaggy.