This controversial issue is discussed at length in the letters page in Daredevil #137.
This issue has variants:

Mind-Wave and His Fearsome Think Tank! (Table of Contents) 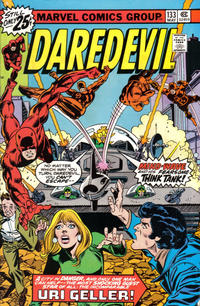 Mind-Wave and His Fearsome Think Tank! (Table of Contents: 1)

First Line of Dialogue or Text
Where: A hidden room in an almost totally abandoned tenement...
Feature Logo