The Return of the Living Eraser! (Table of Contents) 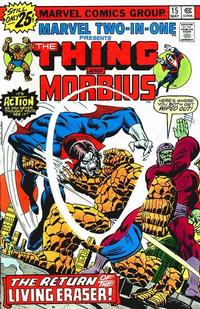 The Return of the Living Eraser! (Table of Contents: 1)

Job Number
JV-117
First Line of Dialogue or Text
All afternoon I've felt a chilling sense of dread...
Genre
superhero
Characters
The Thing [Ben Grimm]; Morbius [Michael Morbius]; Living Eraser (also in flashback); Petril; Roween; Supremor; Giant-Man [Henry Pym] (cameo flashback); Wasp [Janet Van Dyne] (cameo flashback); Alicia Masters
Synopsis
Morbius and The Thing are "erased" by the Living Eraser, which sends them to the Eraser's dimension, where they help Supremor return to the throne. The return to their dimension and stop the Eraser from destroying the Earth.
Reprints

Much of the inking appears to have been done by Dick Giordano proteges. Ron Wilson credited for penciling the splash page in the letters page of Marvel Two-In-One #18.

Spider-Man And The "Twinkie Takers" (Table of Contents: 4) (Expand) /