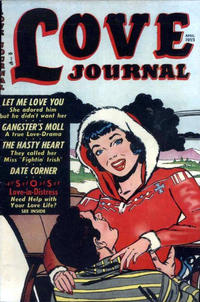 Let Me Love You (Table of Contents: 1)

Genre
romance
Characters
Dr. Jon Sterling; Florence Lake; Steve; Sue Withers; Miss Price; Bert
Synopsis
Florence becomes a student nurse and discovers she no longer has anything in common with her boyfriend Steve. They break up. Florence is assigned to be surgeon Jon’s assistant and falls in love with him, even though he’s always cold and impersonal. They kiss at an office party and when Jon’s father dies, Florence encourages him to go on with his life-saving career. Jon finally admits he loves her.

It is not sure whether or not "Mark Ford" was an actual person, let alone the editor for the title.

First Line of Dialogue or Text
A girl with a most unique problem is Frances M.
Genre
romance
Characters
Mark Ford; Frances M.; George; Ralph
Synopsis
Factory employee Frances falls in love with fellow worker Ralph, who idolizes his older brother George. Frances discovers George is a drug addict, but he says Ralph won’t believe her if she tells him, and this would break up their relationship. Frances comes to Mark Ford for advice.
Keywords
drug addiction

Genre
romance
Characters
Charley Wright; Evelyn Vardon; Martha Lasker; Jim Barnes; Mike; Mr. Vardon; Mrs. Vardon
Synopsis
Evelyn dates Charley, then learns he’s involved in “shady deals.” Convinced Charley ordered a man’s death, Evelyn breaks up with him, but they eventually reconcile. Charley is arrested and Evelyn is forced to testify against him. He gets a life sentence and Evelyn is left to make “a new start” with “a new fellow.”

Woolfolk credit per his record books, via Martin O'Hearn's blog:

Genre
romance
Characters
Doreen O'Hara; Helen; Grace; Tad Bromwell; Mr. Bromwell; Mrs. Bromwell; Penelope Bromwell
Synopsis
Office worker Doreen has a chip on her shoulder and is quick to take offense. She dates salesman Tad and he’s upset by her penchant for making scenes. When Tad introduces Doreen to his family, she becomes angry at a harmless remark and stalks out. Tad tells her to apologize or their relationship is over. Doreen swallows her pride and, even when Tad baits her, refuses to argue. They reconcile.
Reprints